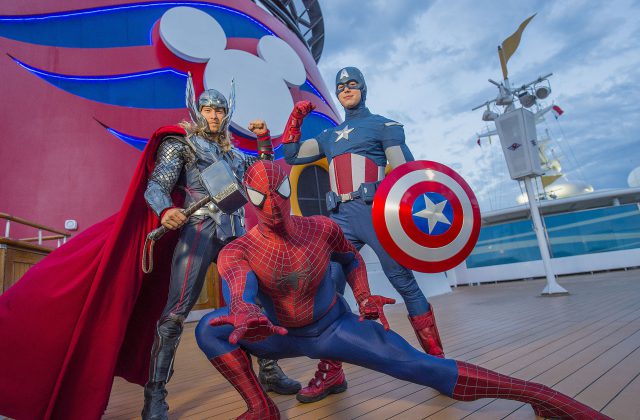 Departing from New York City in the fall of 2017 on seven special voyages on the Disney Magic, Marvel Day at Sea combines the thrills of Marvel comics, films and animated series with the excitement of a Disney Cruise. And in 2018, you can celebrate Marvel Day at Sea on the Disney Magic during eight special voyages from Miami departing January through April. Come celebrate the epic adventures of the legendary Super Heroes and Super Villains from the Marvel Universe during a brand-new, day-long celebration.

Occurring on one action-packed day during each of the seven Disney Magic sailings, the event features all-day entertainment including exclusive interactions with Marvel Super Heroes and the foes that oppose them, an extraordinary deck party, Marvel-themed youth activities, special merchandise, and unique food and beverage offerings. Exclusive screenings of Marvel films including the newest theatrical releases, as well as viewings of the Disney XD shows, Marvel’s Avengers Assemble, Marvel’s Ultimate Spider-Man and Marvel’s Guardians of the Galaxy, will also be featured.

Here’s what to look forward to:
• Spider-Man, Captain America, Thor and other Marvel Universe Super Heroes in scheduled meet-and-greets and photos.
• A spectacular deck party culminating in a stunning display of themed pyrotechnics, lighting, sound effects and the largest collection of Marvel Super Heroes and Super Villains ever assembled on a cruise ship.
• Marvel trivia games covering courageous heroes and fun facts from the Marvel Universe.
• For young heroes-in-training, Marvel-themed games, activities and arts and crafts will be offered throughout the day in the Marvel’s Avengers Academy in Disney’s Oceaneer Club.

Let Us Help You in Planning an Extraordinary Luxury Disney Cruise!
The expert travel advisors at Glass Slipper Concierge® will work with you to create the perfectly planned Disney cruise of a lifetime, making sure nothing is left to chance. Please submit an online consultation request to begin.

Posted on Apr 20 by .(JavaScript must be enabled to view this email address):

It is appropriate time to make some plans for the future and it is time to be happy. I have read this post and if I could I want to suggest you few interesting things or suggestions. Maybe you can write next articles referring to this article. I wish to read more things about it!